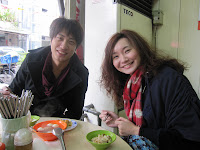 The Singaporean interwebs have not been friendly.  It has taken me 3 days to upload all the pictures from Taiwan.  Grrr!  Advance notice, this is a long entry.  I've put the photos from the trip here. 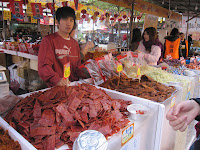 In any case, last weekend I was able to visit a childhood friend of mine, Jojo Chou in Taipei, Taiwan.  Growing up, my brother and I spent several summers playing with her and her two cousins, Tony and Nick.  I hadn't seen Jojo since 1996, around the time she had to start studying all summer to get into the good schools in Taiwan.  It still boggles my mind the difference in cultures.  We were allowed to play, work, dream, and over here (Asia) children go to summer camp for math and science.  Well, okay, Governor's school is in the US, but that isn't quite the same.  Different levels of intensity, trust me. 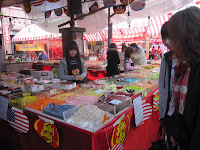 Well, in any case, I got in late Friday night, so I just hung out in the hotel.  Which, by the way, had THE COOLEST BATHROOM EVER.  No, I really mean it.  EVER.  First off, it was in the mid-50s and rainy, so not great, or warm weather.  When I walked into the hotel room, the first thing I noticed in the bathroom was the heated seats on the toilet.  Heated seats.  It was one of those crazy Japanese toilets, with all the buttons in foreign characters, so I didn't try them because I was scared I'd turn off the heating part!  It also had this incredible sunken whirlpool.  Crazy thing was, there was a "spring bubbles" spa setting, so bubbles start coming out of the bottom, then all the lights turn off, and colored LED lights start changing in the room.  Totally whigs you out the first time you press the button.  And finally, there was the crazy shower.  If you see the picture, it vaguely looks like a medieval torture device.  Well, it has at least four settings for the shower.  There's the typical hand held version.  Boring.  Next turn of the selector causes all six of those forward facing jets to blast you full force.  Whoops.  Next is the sauna.  Which got hot.  And finally was the rainforest shower head.  Ahhh.  Amazing.  Needless to say, I did hang out a fair bit in the hotel room.  After being out in the cold all day, it was pretty awesome. 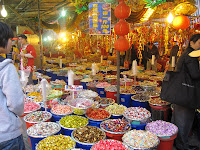 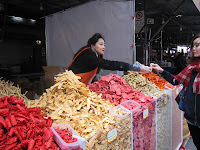 Now, first thing Saturday morning, Jojo and Tony came to my hotel, along with one of Jojo's co-workers, Alisha.  The first place they took me was this fantastic Chinese New Year market.  They had EVERYTHING for sale.  So many different kinds of food, that I didn't even know existed.  The had not just one, but several different kinds of prawn crackers.  Some were more fishy, some peppery, some slightly cheesy, and some, well, were prawny.  I think my favorite thing was some dried sweet pork that tasted a lot like beef jerky.  Jojo really liked the yogurt covered raisins.  The coolest part of the whole market is that you can sample anything.  In fact, they expect it.  The markets here in Singapore don't really seem to let you sample stuff.  This one was way better. 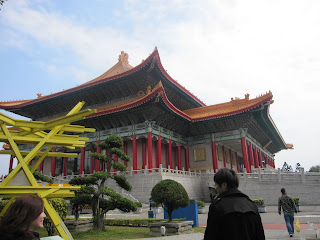 Then we hopped on the MRT and headed over to the Chiang Kai-Shek memorial, and saw the changing of the guard.  FYI: Chiang Kai-Shek is the man who opposed the Communist Party in China and was banished from the mainland. 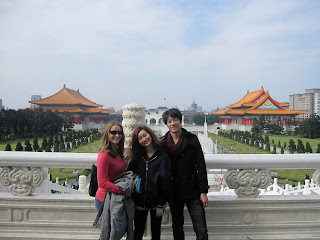 The buildings were just so cool.  And what was even cooler, is that everywhere, in every reflective surface (there are a lot of windows) teenagers were practicing their dancing.  Alisha explained to me that there is a very vibrant street dancing scene in Taipei.  From what I could tell, it was alive and well. 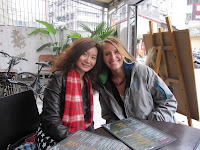 After the memorial, we headed over to Dim Tai Fung, which is one of the best known dumpling houses in Taipei.  We had plates and plates of dumplings, and I learned just how much food Jojo and Tony can still eat.  And still be skinny.  It wasn't just a teenage thing.  Trust me.  They totally ate me under the table.  But the dumplings were amazing.  Luckily, they also have several Dim Tai Fungs here in Singapore, so I'll be able to take Joe with me.  I must say, they are starting to grow on me.  When I first got here, dumplings weren't really my thing.  But now I really like them.  My favorite was the dessert one, that had some kind of Taro paste in it.  Kind of tasted like some of the Japanese desserts.  Subtle, but yummy.

Next up, Taipei 101.  For such a huge building, I really thought it was beautiful.  We didn't go all the way up, as like most of Taiwan, there was a line.  And it wasn't short.  But we walked around the inside a bit, and grabbed some ice cream.  After, we stopped to pose around some of the sculptures outside.  Then, we walked down this square where there were street performers.  But not just any street performers, they were breakdancing performers.  It was pretty awesome.  Tons of pop and lock, some acrobatics, lots of fun.  One of the favorite songs for them all to perform to is that super annoying K-Pop song that is played EVERYWHERE here.  But it was still fun. 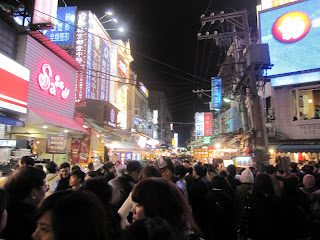 And finally, we went to a night market.  This one was the Shili night market, and it was just PACKED with people.  Not just kind of packed, more like Bourbon Street during Mardi Gras packed.  It was insane.  Shoulder to shoulder people.  And all the shops were for clothes and stuff.  I don't know how in the world you would even really shop, there were just too many people.  But, I did find this crazy food there, it is a potato that is peeled and then mashed.  Then molded back into a potato shape.  Then it is lightly breaded, deep fried, and doused in creamy cheese and other various ingredients.  Since it is Asia, there was, of course, a seafood version.  Ick.  Yes, it was a heart attach on a plate.  But it was also amazing.  The inside tasted like mashed potatoes.  Yummy.  Luckily I had Tony and Jojo to help me finish, as their stomachs both hold way more than mine. 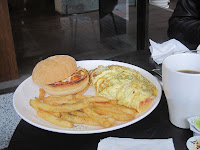 After that, we had pretty much tired ourselves out.  I went back and hung out in my hotel room, then met everyone for brunch the next day.  They took me to this awesome Western restaurant (why can't we have good western places in Singapore???) and then we just hung out at Jojo's the rest of Sunday since it was raining.  A great weekend to catch up with some old friends, I must say.  They were spectacular hosts, and I really enjoyed seeing them.  Hopefully it won't be another 10 years before it happens again!
Posted by Unknown at 4:48 AM 1 comments

Unlike last year, when we ran away from Singapore to Thailand for Christmas and did almost nothing traditional, this year I went a little overboard. I decided that if I was going to stay, I wanted to make it feel as much like the Christmas celebrations from

my and joe's childhood. As a result, the day after Thanksgiving I was up and running with decorations. Fake tree - eep - check. Decorations, garland, stockings, check, check, check.

But this wasn't quite enough for me. Part of what both Joe and I have always cherished about our holiday memories is the large gatherings of family and friends. We don't exactly have the space for a Dillon gathering, but we managed to scrounge up some good friends at loose ends for a wonderful Christmas Eve dinner of ham and pork tenderloin. Mmmmm. This was toasted with tasty beverages, funny stories and a Christmas movie before bed.

The next morning we had a stocking exchange with our few friends who were in Singapore without family this year. Mark and Joe each got turbo charged Nerf guns with extra clips and bandoliers, so the girls were trying to hide from the boys back and forth target practice.

Then it was off to Raffles hotel for champagne brunch. The spread of food was incredibly impressive. In addition to the oyster bar, I enjoyed the Maine lobster and Australian prime rib. It totally cracks me up when you see a buffet that must tell you not only the origin of the food, but the specific animal. Sheep cheese anyone?

Then, it was off for a quick hello at Joe's company party, and back to our guests. We couldn't talk Kristin out of the movie, so Kelly, Mark, Joe and I had to hang out in the pool by ourselves. It is still very strange to not have any cold weather, but I can't argue with Christmas Day pool. The evening was topped off with a couple lovely conversations with family back home, who we were missing dearly. Luckily, the Dillons were able to fix their camera, so Joe got to see his family and disaster was narrowly averted. We both wish we were home. It gets lonely out here, and we miss having all the family gathered in one place, but thankfully we have some wonderful friends that are helping us make new memories here. Much love from Singapore, Joe and Shelby.